Posted by Lyndon V Bechtel on Sunday, March 29, 2015 Under: Prophecy

It seems we read about Israel a lot lately. Benjamin Netanyahu the prime minister of Israel recently visited the United States and gave a speech to a joint session of Congress. A senator from Kentucky bashed the speech and the next day His state was hit by a huge snow storm that stranded hundreds on the highway and put thousands out of power. There is clearly a spiritual battle going on were Israel is concerned.

The temple Institute has announced the completion of an altar of burnt sacrifice intended for the Third Temple (Breaking Israel News, Mar. 9,2015). The Temple Institute was founded in 1986 and its purpose is to see the third temple rebuilt.

They now have priestly garments all made and ready to go for thousands of priests. The high priest's golden crown costing 30,000 the high priests breastplate with its 12 precious stones inscribed with the names of the tribes of Israel, a copper laver, an incense altar, silver trumpets, gold-and silver-plated shofars, harps, and many other things. A large menorah has been fashioned from 95 pounds of pure gold, valued at about 2.5
million. They also have the perfect red heifers for their sacrifice incidentally those came from Mississippi as it was the only place in the world that had a genetically pure red heifer.

The Temple Institute recently published a video entitled "The Children Are Ready," depicting children building a model of the Third Temple on an Israeli beach. In Jewish tradition the rebuilding of the Temple is associated with the coming of the Messiah.

According to Maimonides the highest rabbinical authority, any Jew that starts rebuilding the Temple is a potential Messiah. This explains why the Jews will accept the Anti Christ as the Messiah as the Bible says the Anti Christ will rebuild the third temple.

This leads me to the question how close are we to the rapture of the church? The Jews are ready to rebuild their temple they wait for one man! We see the world religions coming together Pope Francis more than any other pope has made great strides to unite all and to go so far as to say that even atheist can make it into Heaven. "As Long as they follow their conscience and are sincere". Pope Francis and the Late Pope John Paul the 2nd have both stated that all religions lead to God all People are Gods Children.

2nd Thessalonians 2:4
Who opposeth and exalteth himself above all that is called God, or that is worshipped; so that he as God sitteth in the temple of God, shewing himself that he is God.

and indeed we see all the World being United Under Rome through which the beast will come.

The Time is very close are you ready? 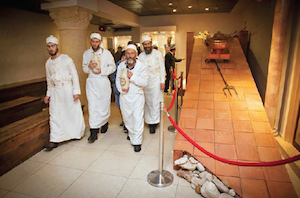