Posted by Lyndon V Bechtel on Monday, October 7, 2013 Under: Creation/Evolution 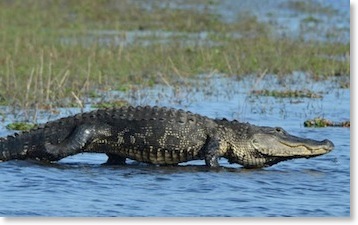 The American alligator is a large, semi-aquatic, carnivorous, fresh water reptile that lives in the warm southeastern part of the United States, with the largest populations in Florida, Mississippi, and Louisiana. The name is from the Spanish el larato, meaning big lizard, which is what the Spanish explorers called the creature.

The alligator can be distinguished from a crocodile by its broad, U-shaped snout as opposed to the narrow, V-shaped snout of the croc.

The alligator was endangered in the 1950s due to the market for its skin, but it has made a huge comeback since being placed under government protection. There are an estimated two million alligators in Louisiana and Florida alone.

The largest alligator on record was a Louisiana specimen over 19 feet long; the heaviest was a Florida gator weighing over 1,000 pounds. Two gators weighing about 725 pounds were killed on the same day in Mississippi in September 2013. They have been known to live more than 75 years

The alligator’s respiratory system is like that of a bird, with the air moving in a unidirectional manner through its lung system.

The alligator has a valve in the back of its throat that closes when it submerges and thus prevents the water from entering its lungs.

It is a cold-blooded creature and must sun itself to maintain proper body temperature. They remain dormant if the temperature is below 55 degrees F (13 Celcius), and during winter months they often live in underground burrows, though they emerge to bask in the sun.

Its tail forms half of its length and serves many functions, propelling it through the water, acting as a weapon, and storing fat that the alligator uses for nourishment during times when it cannot feed.

A large male alligator can bite down with a massive force of more than 2,900 pounds. This is the most powerful bite force ever measured, more than the force of a mid-size car falling on top of someone. In contrast, the hyena has a bite force of 1,000 pounds; a lion, 940 pounds; a dusky shark, 330 pounds; a Labrador dog, 125 pounds; and a human, 170 pounds.

The alligator can snap its jaws shun within 50 milliseconds.

The alligator has about 80 sharp teeth, and new ones form when old ones fall out.

The alligator has tiny bumps on its face that are ultra sensitive to touch, even more sensitive than human fingertips.

Typically the alligator feeds on fish, birds, and smaller animals, but it can kill larger prey, such as deer and wild boars, by dragging them under the water and drowning them.

Gators spend much of their time floating partially submerged with just their snout and eyes showing above the water, waiting for a meal. They have excellent night vision and a keen sense of smell and often hunt at night.

The female builds a large nest of vegetation that provides heat for the eggs as it decomposes. The sex of the offspring is determined by the place occupied in the nest and the temperature at which it is incubated. If the temperature is 86 degrees F (30 degrees Celsius) or lower, the eggs produce females, and those of 93 degrees F (34 degrees Celsius) or higher produce males.

A group of alligators is called a “congregation.”