Presbyterians Vote No On Denouncing Infanticide

Posted by Lyndon V Bechtel on Tuesday, July 22, 2014 Under: Apostasy 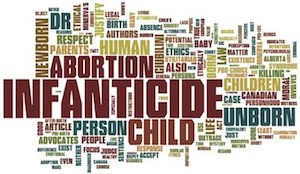 PRESBYTERIANS VOTE NO ON DENOUNCING INFANTICIDE

(The following has been excerpted from Friday Church News Notes, July 18, 2014, and posted on manifestedbythelight.com)

- The General Assembly of the Presbyterian Church (U.S.A.) has been busy this summer making all of the wrong decisions. It voted yes on “same-sex marriage,” yes on divesting its stock in companies whose products are used by Israel (to protest Israeli policies toward Palestinians), and no on denouncing the practice of killing babies born alive during botched abortion procedures. The following motion was presented to the assembly and rejected: “Direct the Moderator of the General Assembly and the Stated Clerk to issue statements that denounce the practice of killing babies born live following an abortion procedure, such as was revealed in the Dr. Kermit Gosnell clinic in Philadelphia.” TheNational Review observes, “Peter Singer believes that unwanted infants can be killed in the same manner as they can be aborted. Apparently, so does the Presbyterian Church, USA” (Presbyterians OK with Killing Born Babies,” National Review, June 24, 2014).