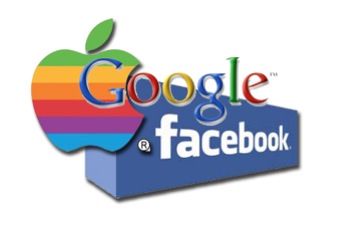 FACEBOOK, APPLE, GOOGLE CENSORING CHRISTIAN SPEECH   The following is excerpted from “True Liberty in a New Media Age,” by Craig Parshall, National Religious Broadcasters, Sept. 15, 2011: and posted on manifested by the light on June 3/2012 “The policies and practices of several major Internet-interactive ‘new media’ communications platforms and service providers were examined and evaluated in order to determine the risk of those entities committing anti-Christian viewpoint censorship. The companies reviewed were: Apple and its iTunes App Store; Facebook; MySpace; Google; Twitter; and Internet Service Providers (ISPs) Comcast, AT&T, and Verizon. Our conclusion is that Christian ideas and other religious content face a clear and present danger of censorship on web-based communication platforms. ... Apple has twice removed applications that contained Christian content from its iTunes App Store. In both instances, Apple admitted that these apps were denied access because it considered the orthodox Christian viewpoints expressed in those applications to be ‘offensive.’ ... Of the 425,000 apps available on Apple’s iPhone, the only one scensored by Apple for expressing otherwise lawful viewpoints have been apps with Christian content. The search engine giant Google has committed past practices of anti-religious censorship. For content reasons, it refused to accept a pro-life advertisement from a Christian organization, an issue that prompted litigation in England. ... Also, in March of 2011, Google established new guidelines for its ‘Google for Non-Profits,’ a special web tool program, but specifically excluded churches and other faith groups, including organizations that take into consideration religion or sexual orientation in hiring practices. Facebook has partnered with gay rights advocates to halt content on its social networking site deemed to be ‘anti-homosexual,’ and it is participating in gay-awareness programs, all of which suggest that Christian content critical of homosexuality, same-sex marriage, or similar practices will be at risk of censorship.”